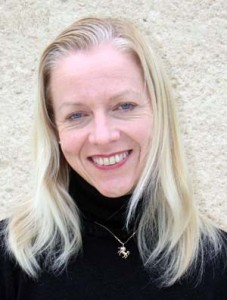 Jane Sullivan received her early artistic training from her mother, an artist and illustrator of fairy-tales, and she probably inherited her love of lettering from her father (who passed away when Jane was an infant), also a painter and a fine calligrapher. In Los Angeles, where she was born, Jane studied Fine Art at Mount Saint Mary’s College (a double major with English Literature) and at the Otis Art Institute.

Jane is essentially self-taught in calligraphy, which she has practiced since the age of 11, but in which she became fully proficient when living in Ireland in the 1990s. There she founded, with fellow calligrapher Jonathan Bulfin, the Calligraphy Society of Cork. Her free-lance career in Cork, and later in Waterford, brought her many commissions, among them important parchments executed for the National University of Ireland, the Craft Council (Dublin), and the Irish Presidency. She also worked on private orders, and gave classes for the Calligraphy Society and for numerous schools.

While in Cork, Jane pursued advanced studies at UCC, specialising in medieval manuscripts and Insular palaeography. She then spent two years as a Visiting Scholar in Cambridge University, in the department of Anglo-Saxon, Norse and Celtic. These years of academic work and research permitted her to acquire a knowledge of the art of calligraphy as it was practiced in the early Middle Ages, principally in Irish-influenced scriptoria, and this has continued to inspire her own artistic creations.

Since moving to France in 2001, Jane has continued to develop her own unique style of lettering and illumination. She likes to combine her understanding of historical scripts with her love of fantasy illustration, creating illuminated letters, texts and Celtic decoration that are original and over-flowing with life!

Jane is the author of several books on calligraphy and illumination, dragons and unicorns, as well as fairy-tales, and — most recently — her fantasy trilogy “Return to FaÃŦrie”!

Jane Sullivan began her musical studies on the piano, at the age of 6. She was 19 before she had the opportunity to begin her study of the harp, and this was on a concert (or “pedal”) harp with Dorothy Victor in Los Angeles. Later, in Ireland, she became interested in the smaller, more intimate, and more easily transportable (!) Irish harp. In Dublin she was the student of Denise Kelly, and when she moved to France she studied with Marie-Emmanuelle Allant in Bordeaux.

Jane loves the repertoire of the Irish harp (ranging from 22 to 38 nylon or gut strings) which can include medieval music, traditional Irish (or other Celtic) airs, as well as modern compositions written for this popular “folk” instrument.

She gives recitals and concerts, notably with her friend Christian Goulet, a flutist and harmonica player, with whom sheÂ  recorded a CD (“Brise d’Etoiles”). Jane also plays for weddings, receptions and dinners for small groups, as well as working with poets and story-tellers. In Saintes she worked extensively with the story-teller Marie-Louise Ciaralli, performing in small theatres, galleries, libraries and castles.

Jane also gives classes and sessions of “discovery” on the harp, for individuals, small groups or in schools.