As explained on the Home page, Janeâs On-Line CalligrafĂŠe Art School is organised in modules of six lessons, and each module will lead you, step by step, to the creation of a beautiful project! As the access to a module is limited to 12 months, it is recommended to follow one module at a time, only signing-up for a new module when you have completed the preceeding one (which may, of course, take less that 12 months, if you are enthusiastic!) as you will lose access to the ongoing module when you register for a new one (but will keep all the handouts…).

Material for Calligraphy : a ruler, and either a calligraphy dip-pen with ink (or to use with gouache paint â more about this in the video!) or a calligraphy felt-tip marker.

Module One —Â  An Illuminated Book-Mark

Class 1-1:Â  The Lombard Letters, the basis of our first illuminated initials.Â  Simple decoration and motifs to enliven your letters.Â  Two handouts.

Class 1-2:Â  Calligraphy in the Humanist Style, the basics of pen-angle, pen-strokes and letterforms in the minuscule alphabet.Â  Practicing with pleasure and an eye on balance, beauty and rhythm.Â  Two Handouts.

Class 1-5:Â  Celtic Interlace Border Design.Â  A very simple way to create a complicated-looking rectangle of knotwork!Â  Very fun and relaxing to do, too — and useful in our final project for this module.Â  Two Handouts.

Class 1-6:Â  Our First Project!Â  A book-mark — the name of your choice, presented with an illuminated letter for the initial, followed by calligraphy in Humanist minuscule, PLUS a fantastical creature (unicorn or dragon, as you prefer — or even both!) and a colorful band of Celtic interlace as complementary decoration.Â  What a master-piece!Â Â  Five Handouts.

Class 2-3:Â  Fantasy Art Roughs — for a miniature âsceneâ inside or around your letter: mermaids and sea-monsters, dolphins and friendly fishes. Three handouts.

Class 2-5:Â  Step one of the final project: Calligraphy of the final text and composition of the central image in pencil. One handout.

Class 2-6:Â  Step two of the final project: Drawing, outlining and painting your enchanted seascape and golden letter. One handout.

Module Three — An Illuminated Poem in âbĂ˘tardeâ calligraphy, with fairies, unicorns, rabbits and a flying horse!

Class 3-1: Roughs for the lay-out of your composition.Â  Learning to draw âacanthus-leafâ decorations, rabbits and toadstools.Â  One handout.

Class 3-4:Â  Beginning the final project.Â  Lay-out of the composition in pencil.Â  Calligraphy of the text in gouache. Â One handout.

Class 3-5:Â  Drawing all of the decoration and the illuminated initial.Â  Out-lining in gouache or ink, before erasing all the pencil-work to prepare for the final painting step. Â One handout.

Class 3-6:Â  Painting all the decoration, then returning with a very fine brush and white gouache to add highlights and details. One handout.

Six classes which guide you through all the steps of sketching, inking and painting a dragon in a fantastical setting, with a swirling scroll bearing the title in Gothic calligraphy. One hand-out per class.

Class 5:Â  Step two of the final project: inking in the outline and refining the details. Learning

to draw a scroll for the title.

Class 6:Â  The last step: painting the background with a light wash of color, laying in the

solid color areas and then adding delicate details and highlights.Â  Writing the title

of your painting in Gothic calligraphy. 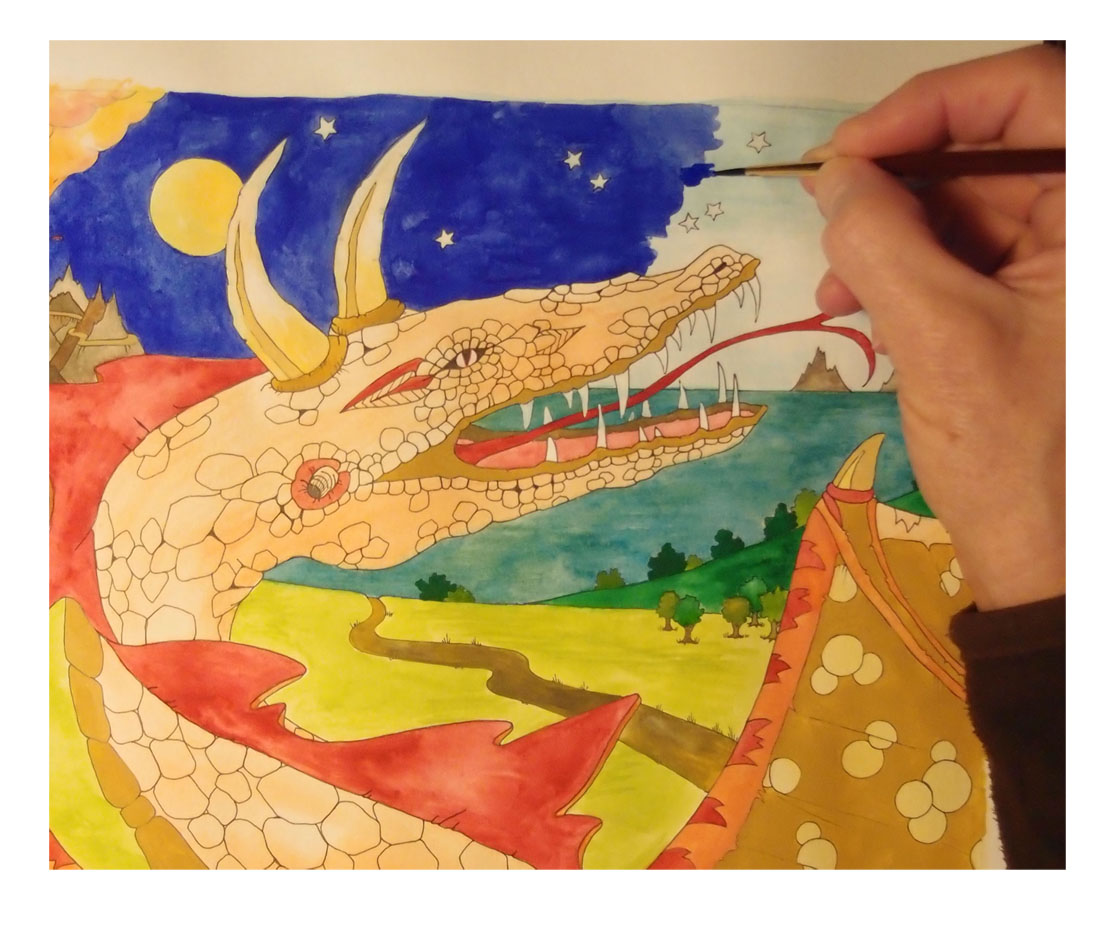 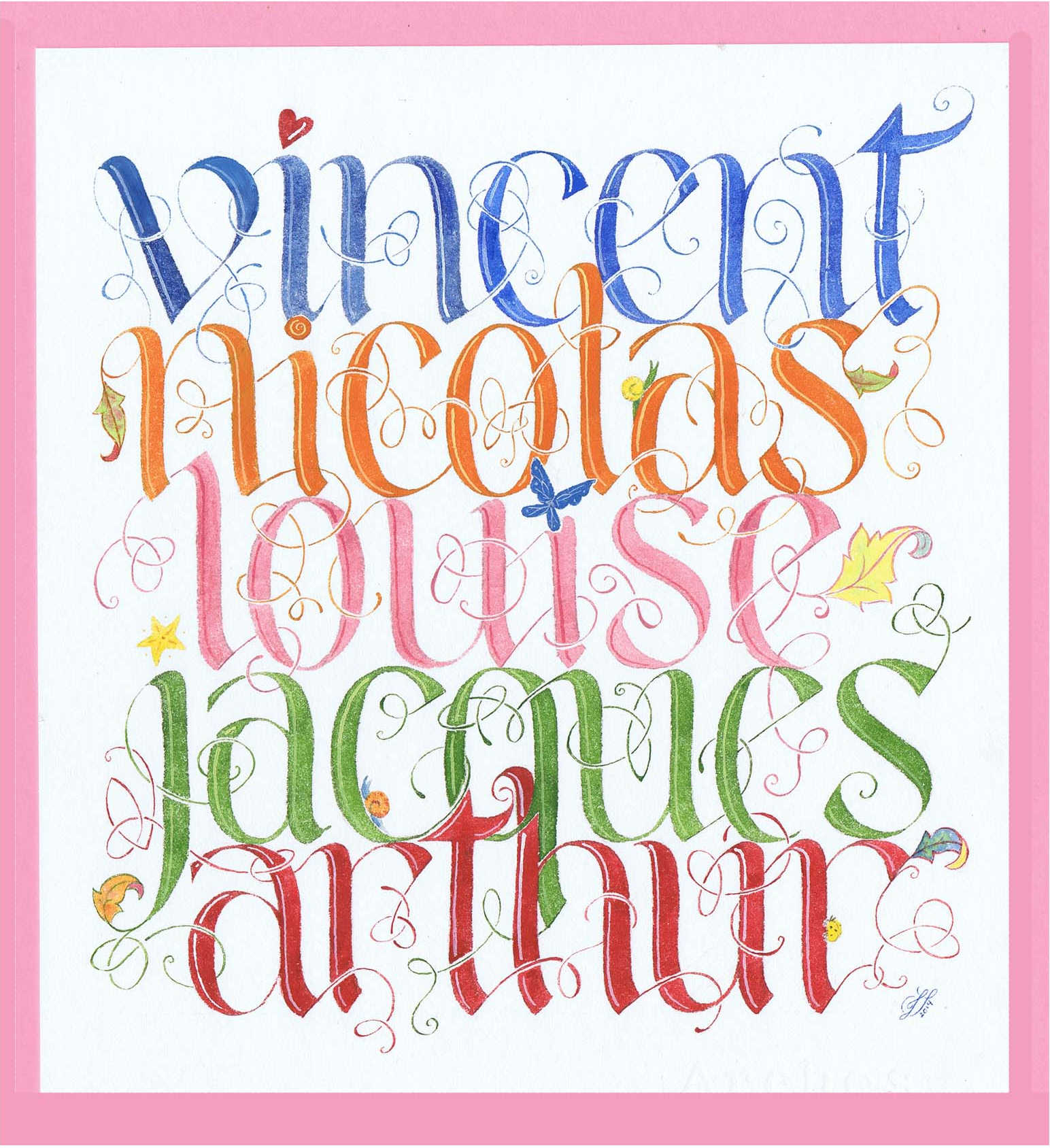 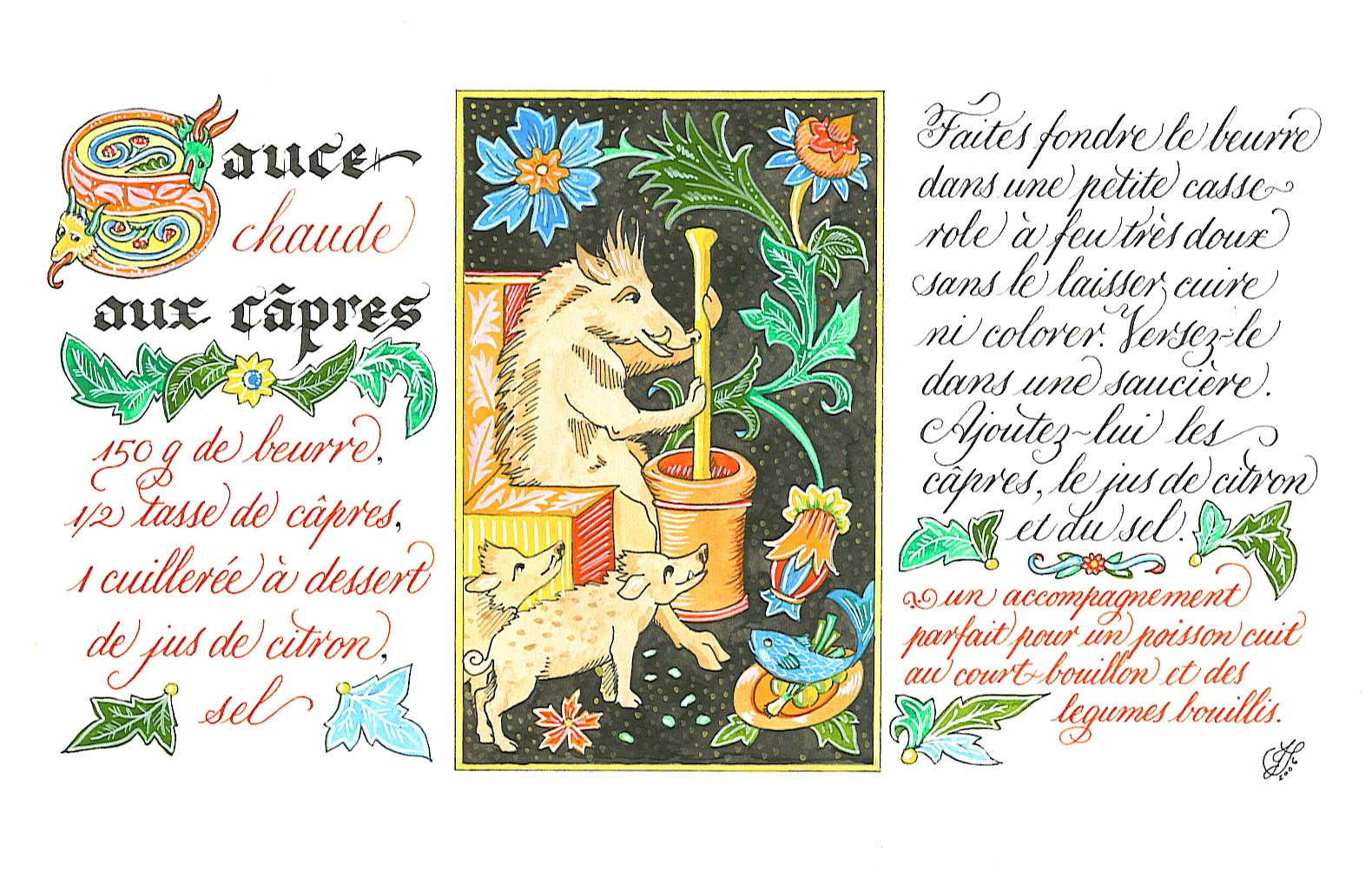